Why should my child play at Alpine Strikers? Expand

What is our player & team curriculum? Expand

The Alpine Strikers player/team development curriculum is a more specific, modified version of the United States curriculum. We have modified the basic principles of the US curriculum to better fit the needs of the players in our community. Each age of the curriculum has physical, technical, tactical, and psychological goals and standards that we strive to have our players reach. The earlier ages of our player development model focus on improved technical mastery and physical improvement. As the kids become a bit older we begin to place additional emphasis on the psychological and tactical components of the game. In the 11v11 stage, all 4 stages are equally emphasized as our athletes become total soccer players.

Our curriculum strives to get all teams in our club playing a similar style of soccer that is developmental, enjoyable, and successful. At the younger ages we emphasize developing the player over the success of the team. As the players get older, team development and success become increasingly important as we look to push our players into successful high school and college programs.

What leagues do we play in? Expand

Admiral is our player uniform provider. Specific player information gets communicated from the club directly to the parents. Here is our link to our web store.

Information that can be found on the Alpine Strikers TeamSnap Parent Resources Site: Expand

Descriptions of Volunteer Roles for Teams and Club

What age group is my child in? Expand

Where can I learn basic soccer terminology? Expand
https://www.juniorsoccercoach.com/public/730.cfm

What is an ACL Injury?

The ACL (anterior cruciate ligament (ACL) is one of four major ligaments that provide stability to the knee joint. These fibrous bands  attach bone to bone and help control excessive motion of the knee joint and keep the lower leg from sliding too far forward. Of the four major ligaments of the knee, ACL injuries are the most common. The majority of ACL repairs that occur each year are done on young athletes (under age 25) and female athletes.

What Causes an ACL Injury?

ACL injuries are common in sports that involve sudden changes of direction, such as football, and soccer. Most are non-contact injuries that occur during sudden twisting motion (for example, when the feet are planted one way and the knees are turned another way) or when landing from a jump.

The causes of ACL injury have recently been the focus of research. Factors contributing to ACL injuries include ground hardness, grass type and cleat type. But one of the other major findings is that women are nearly three times more likely to have ACL injuries than men. And some statistics says that a female soccer player is eight times more likely to injury her ACL than a male soccer player.

How Do I Prevent an ACL Injury?

Athletes can reduce their risk of ACL injuries by performing training drills that require balance, power and agility. Adding plyometric exercises, such as jumping, and balance drills helps improve neuromuscular conditioning and muscular reactions and ultimately shows a decrease in the risk of ACL injury. Many team physicians now routinely recommend an ACL conditioning program, especially for their female players.

Phases of the ACL Injury Prevention Program should be performed at least 2-3 times per week during the season and includes:

The Bottom Line for ACL Injury Prevention
For both men and women who participate in start and stop sports, appropriate skills training such as those in the above program, may be the key to staying injury free.

PCA gains support from a National Advisory Board, including National Spokesperson and 11-time NBA Champion Coach Phil Jackson, and many other top coaches, athletes, organization leaders and academics who share PCA’s mission.

The Positive Coaching Alliance mission is to transform the youth sports culture into a Development Zone® where all youth and high school athletes have a positive, character-building experience that results in

The PCA Way is a document that establishes and helps maintain cultural norms at Positive Coaching Alliance. PCA Founder Jim Thompson -- who defines "culture" as "The way WE do things HERE" -- was inspired to create this document by his time at Hewlett-Packard, where he experienced The HP Way. You can download the document as a PDF by clicking the image below. 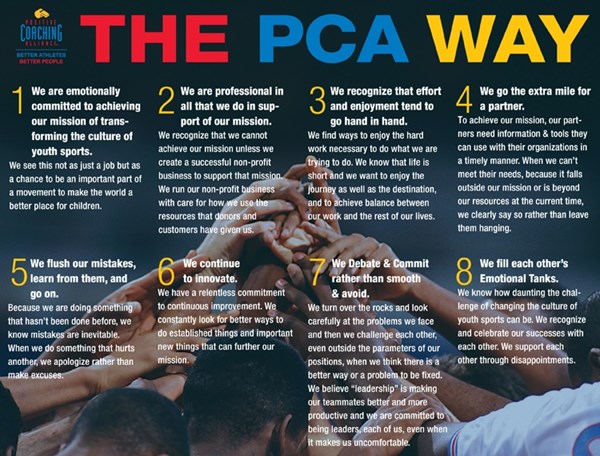 At PCA, we have a relentless commitment to continuous improvement. One of the ways we constantly look for better ways to do established things is through our annual PCA Staff-Wide Book Club. Learn more about that book club here.

Bottom line, we want to create a culture where kids love to play the game. They look forward to practices and games as times when they will have fun. The joy they find in playing will last a lifetime.

In a positive youth sports culture, all resources do not flow to the elite level. Athletes have options determined by their ability and interest. Elite athletes compete in "meritocratic" environments in which a place on the team and playing time are determined by ability, performance and effort. Less talented or skilled athletes, or simply athletes who want a different kind of experience, have the option to play in developmental or recreational programs in which they are guaranteed the right to play at least a part of every game.

At every level, players are proud to have their families and friends see them play. Knowing that they are an important part of the team contributes to this proud feeling; their coaches are supportive and do not embarrass them in front of those watching; they are confident that their parents are supportive and will not confront the officials over questionable calls; and ultimately, they know that those watching are proud of them whether or not they win the game.

All involved in youth sports (players, coaches, parents, officials, and fans) realize what a special time this is. They look at their involvement as a privilege that they never want to dishonor. They realize that sports provide a time when they get to interact with people they do not see on a regular basis, and they come to cherish this time. Players know that this is a time when they can learn from each other (as well as from the coach), and the coach sees how much can be learned from the players. Players look forward to playing challenging opponents because they push them to perform to their highest potential.

Coaches feel the responsibility not only to teach their players the skills and strategy behind the game, but also a respect for the tradition of the game and for all who are involved (teammates, opponents, officials, and fans). Learning to honor the game contributes to a growing sense of responsibility and maturing moral reasoning that helps athletes prepare to become contributing citizens of the larger community.

Coaches realize that what they are teaching their players carries far beyond the field into the classroom, the home, and even into future jobs. Coaches have their players (and team as a whole) focus on their effort and personal improvement, rather than simply on the results of the game. They help players recognize that mistakes are an inevitable and important part of the learning process and that a key to success is being able to rebound from mistakes with renewed determination. This way, players gain a sense of control over their own development and confidence in their ability to succeed, in life as well as in sports.

Players have an important voice in creating this positive culture, and there are multiple and ongoing opportunities for them to shape their own environment. During team discussions players speak and contribute. When decisions are being made that affect the entire team/league, coaches and league organizers make a concerted effort to be approachable and players' ideas are sought out and considered. Having this voice increases players' sense of internal motivation, and they feel a stronger sense of control over their surroundings.

This positive culture encourages athletes to play multiple sports and never pressures players to specialize in one sport too early in their careers. Coaches resist the urge to pressure their players to give up other sports besides their own, realizing that what might give them the best winning percentage is not always the same as what is in their players' best interest.

When a game is on the line, can we really live up to this description of a positive culture? Can we really expect coaches, players, fans, and parents to uphold this positive culture if it might result in losing the game? The answer has to be, "Yes!" All involved must realize that winning cannot be the only goal. Maintaining a positive culture where positive character traits are developed in our players must come first. When the game is on the line and tensions are running high, it can take a high level of moral courage to keep our focus on what is really important, but if we can do that, we will teach our children an invaluable lesson. We must believe that maintaining this positive culture is so vital that we are willing to stand up to others that are putting it in danger. Our vision needs to stretch far beyond winning a specific game to making a lasting impact on the lives of our players.

In March 2000, 50 youth sports leaders came together at the first annual Against the Grain Forum convened by Positive Coaching Alliance based at Stanford University and the Center for Sport, Character & Culture at the University of Notre Dame. This vision statement emerged from that event.